“I hope everything I accomplish stands as a living example that all things are possible, no matter what you look like, where you come from, or what your experiences may have been.” 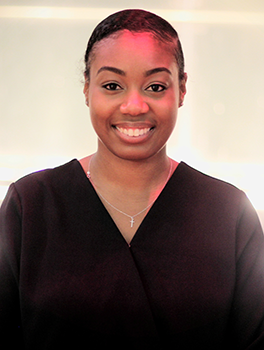 Ebrie Benton is earning a bachelor’s degree in psychology and looks forward to using her education to advocate for social change. Ebrie initially began college several years ago but had to take time off because of financial difficulties. She is happy to be back in school pursuing her dreams and is proud of the example she is setting for her son.

Ebrie calls her time away from college a “blessing in disguise,” and says she used those years to grow into a stronger and more resilient woman. During that time, she built a successful career in healthcare and became a nationally certified and state-licensed pharmacy technician. Along the way, Ebrie also discovered an interest in promoting democracy. She now serves as a Precinct Delegate in Wayne County and works for the Detroit Department of Elections, helping to administer elections and ensure that every citizen has access to the vote. She was chosen to be a part of the Detroit City Clerk’s Future Leaders Program, where she is learning skills in government administration. After completing her bachelor’s degree, Ebrie plans to enroll in Wayne State University’s Master of Public Administration program. She says, “I want my entire life to be a continuous service and example to my fellow citizens of Detroit.” She plans to run for Detroit City Clerk during the 2025 Municipal Election.

Ebrie is motivated by her desire to create a better life for her son, Cameron, and for other children like him. She is working to write and publish an original children’s book, titled “Dear Brown Girl, It’s a Big World,” which she hopes will empower young girls of color and people from disadvantaged communities. She says, “I hope everything I accomplish stands as a living example that all things are possible, no matter what you look like, where you come from, or what your experiences may have been.”