“Being a black woman is extraordinarily important to me...that identity coupled with everything I’ve been able to achieve is an important symbol...” 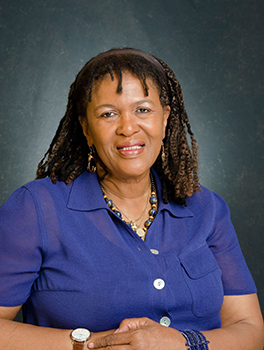 Dr. Brenda Flanagan is familiar with the term “nontraditional student” and all that it entails as a University of Michigan student interacting with CEW+. Now, moving forward in her fruitful career, she acknowledges how her accomplishments serve as a symbol of success for those that also hold some of Flanagan’s intersectional identities: a nontraditional student and a woman of color.

During her undergraduate years at the University of Michigan in the 1970s, Flanagan received emergency funding from CEW+ while she was pregnant, already with two small children, and had just gone through a tumultuous divorce. As an international student from Trinidad who never finished high school, she only had a few community college credits that she “snuck out to get,” due to her unsupportive (now) ex-husband. Her CEW+ scholarship allowed her to live in campus housing while completing her undergraduate degree in print journalism. New to town and trying to find her place at almost thirty years old on a college campus, she quotes: “CEW+ is family.” Even though Flanagan was juggling children and an education that made it difficult to give time elsewhere, she says CEW+ was helpful for, “just being around supportive women… having women listen to me, understand what I’d been going through, and be willing to help me…CEW+ said yes to me. Yes, we see your potential. Yes, we see you’re somebody who we would like to help, and you will go on to help other people. And that’s what I needed.”

Originally, Flanagan had always dreamed of being a world-traveling journalist. At the same time as finishing her B.A. and graduating with distinction, she started her M.A. in TV and Radio, which she completed in 1977. Eventually, she realized she wanted to stay in academia to keep pursuing a job in order to be able to provide for her children and stay home with them during the summer. So, she applied for and was accepted into her PhD program at the University of Michigan, graduating in 1986, where she focused on researching pesticides and their effects on small-scale farmers. She was awarded a CEW+ fellowship to help fund this research for her PhD as well, to which she reflects, “today there is a saying ‘I’ve got your back,’ right? CEW+ had my back.”

Although extremely successful in her academic career, Flanagan is still able to reflect on the harder times. A difficult choice that still weighs heavy on her as a mother was whether to receive emergency funds for her daughter’s high school graduation dress or other needs. “It turned out I needed money so desperately for other things…I cut down an old dress I had so my daughter could wear it to her high school graduation, and we used the money for food.” Today, after making it through those harder times and earning other teaching positions at Wayne State University and Eastern Michigan University, Flanagan teaches at Davidson College in North Carolina.

When Flanagan was in school, she often noticed she was the only black person in her classroom, though she didn’t realize it at the time. Now, at Davidson College, she is still the only black person in the English department, and the first black professor to receive the Hunter-Hamilton Love of Teaching Award, the highest teaching award to receive at Davidson College. These important accomplishments have led her to reflect, “being a black woman is extraordinarily important to me…that identity coupled with everything I’ve been able to achieve is an important symbol for younger black women, but also a symbol for younger black men.”