“I never really thought I needed a role model; I was a pretty strong woman...but it’s true, you kind of do. It’s useful to have somebody.” 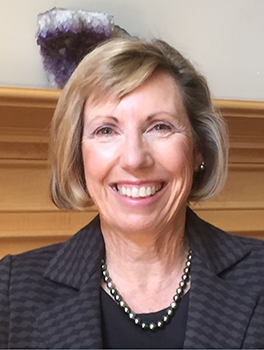 Over the course of Dr. Carol Stratford’s time at the University of Michigan, she has transitioned from being a CEW+ scholarship recipient to a CEW+ scholarship donor, with a plethora of accomplishments in between. However, this was no easy feat. Between these two points, Stratford focused heavily on the theme of education. Simply put by Stratford, “it’s all about education.” Her story lives out this statement.

Years after Stratford met her husband at Stanford University during undergraduate, they traveled across the country to the University of Michigan for their graduate programs. Before eventually completing her PhD in pharmacology at the age of 30, Stratford and her husband experienced many bumps in the road due to financial difficulties, though none acted as setbacks. After camping near campus upon their arrival to Ann Arbor, they were able to find housing and get their feet on the ground. This is where Stratford’s CEW+ scholarship was able to support her. As most graduate students have only a tight stipend, she was able to use her scholarship to assist with her living and tuition costs moving into her thesis work for her PhD. Though, the funding served as much more than financial assistance alone: “…very affirming…somebody thinks I have some promise that I might make it through…made me feel like maybe I could make it. And obviously I did eventually.”

Following the end of a postdoc at Michigan, Stratford and her husband decided to start a family “against all odds.” While looking for jobs, the California couple decided the Michigan snow wasn’t for them and made their way back to the West Coast with their six-week-old baby. After a second postdoc at Stanford, Stratford helped start a new company Neurex and transitioned into patent writing. She then moved to a small law firm to work as a patent agent. Shortly after experiencing the steep learning curve into patents, she went to law school to earn her J.D. while working part-time when her two kids were three and seven years old. After working as a biotech patent attorney in various start-up companies and even working for a major company many of us know Pfizer, Stratford retired. Having been retired for almost ten years now, she admits she does, “kind of miss it.”

Now Stratford spends her time living an active lifestyle visiting Hawaii, where she once lived for three years while her husband served in the Navy. She also spends her time volunteering with NAMI, the National Alliance on Mental Illness, running her family’s commercial real estate interests, and biking, swimming, and loving the Hawaii lifestyle. Although retired, Stratford’s story does not end there; she of course brings everything back around to education.

Stratford created the Margaret E. Gnegy Scholarship to CEW+ to honor her role model and close friend Margaret “Peggy” Gnegy. Dr. Gnegy was one of the only woman professors at the time Stratford was a graduate student, and she kept in touch with Stratford after their classroom time together–even helping her find her post-doc position at Stanford. “I never really thought I needed a role model; I was a pretty strong woman…but it’s true, you kind of do. It’s useful to have somebody. As a woman sometimes you feel more comfortable talking to another woman. Especially when you’re having problems.” Stratford has a strong identity of an independent woman. Even in her 47 years of marriage, she has always been able to take care of herself. However, she recognizes the importance of a helping hand from resources like Dr. Gnegy and CEW+. Higher education is valuable to so many of the participants that are seeking financial assistance from CEW+; they have just fallen into economically hard times. Striving to help those in need get such an important education and especially uplift women+ in STEM, Stratford believes her scholarship today is the best way to serve these people. “It helped me when I needed some help…sort of like paying it forward.” Dr. Gnegy was Stratford’s example of “a woman who had really made it,” especially in academia and science. Now Stratford is able to serve in the same way.