“As I started getting closer to the finish line and I had to be away from my children, it was nearly unbearable, but I kept saying: I have to set the bar high for them, and I have to show them that you can do it no matter what age you start out.” 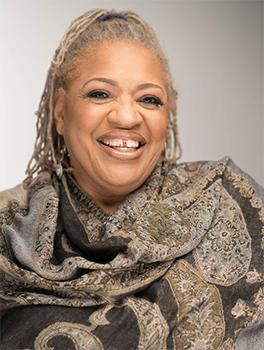 When Cassandra Scott arrived at the University of Michigan, she was determined to immerse herself fully. A mother of eight, Scott had watched her four oldest children go to college, and she was ready to make the leap herself.

She started at community college in 1996, where she worked internships at an alternative-to-jail program and an organization that helped find community placements for homeless people with severe mental illnesses. One of her professors was blown away that she didn’t already have an MSW, and encouraged her to pursue the degree, promising, “if you do well here, I will recommend you to the University of Michigan for the non-baccalaureate MSW program.” Scott did well: she was one of ten students accepted into the program.

Scott strived to make the most of her college education, and she chose to live in the dorms. Scott recalls, “When I was moving in, my youngest was 13, and every time we went to bring more luggage in, they would ask her for her ID instead of me. It got around campus really quickly that we’ve got a grandmother living in the dorm.” Over time, Scott became an “unofficial RA,” giving relationship and parenting advice.

The transition was far from easy, however, as her four youngest children were living two hours away with their father. Scott reflects, “I was shocked at the amount of disbelief and questioning that I received from people. My children were in junior high and high school, but my friends were very, very disturbed. I said: I don’t understand that. I’m a parent, he’s a parent, why can’t he parent the kids while I go to school?” Scott and her ex-husband were learning to parent in an entirely different way, which was often challenging. But the hardest part for Scott was the distance from her children. Scott says, “As I started getting closer to the finish line and I had to be away from my children, it was nearly unbearable, but I kept saying: I have to set the bar high for them, and I have to show them that you can do it no matter what age you start out.”

CEW+ became a source of support and community for Scott. In 1998, she was awarded a CEW+ scholarship, which became “a lifeline.” Scott adds, “CEW+ provided motivation. It wasn’t just the scholarship. At the Center, there were always people who would sit down and talk and motivate me and say ‘yeah, you can go on and get your doctorate degree’ and share their experiences and the amazing things that women were doing in academia.”

In fact, Scott went on to earn her doctorate. Following her graduation from the University of Michigan in 1998, where she was one of two student graduation speakers, she went on to become housing clinical director at the same homelessness organization where she had been an intern in community college. Ultimately, after serving as the director of several organizations, she went on to Barry University and became a professor in the field of macro social work. Scott reflects, “Teaching utilized all my skills: my parenting skills, my leadership skills, my educator skills, my emotional skills.” She currently teaches at Alabama A&M University, the alma mater of three of her sons, and lives close to her family once again. Over all the years, Scott says, “My kids kept telling me that they were proud of me.”