"My experience drives me to ‘lift as I climb’ and ensure that everyone has access to education and opportunity.” 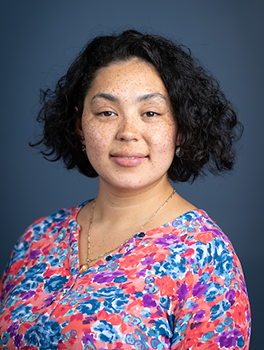 Irma Maribel Andrade Guzman is a proud first-generation college student who is earning her master’s in social work. The daughter of immigrant parents from San Luis Potosi, Mexico, and a mother of two, Irma is passionate about helping families from underserved communities succeed. She says, “The road to earning my bachelor’s degree was nontraditional in many ways…. My experience drives me to ‘lift as I climb’ and ensure that everyone has access to education and opportunity.”

For the past seven years, Irma has worked to support underrepresented students as they apply to college. She worked at the U-M admissions offices in Ann Arbor and Detroit, where her colleagues say she was “instrumental” in expanding recruitment of Hispanic students. She also worked as a college advisor in Flint through the Michigan College Advising Corps and was a tireless advocate for students. She says, “As a first-generation, low-SES Latina with immigrant parents, I experienced many of the same barriers as the students I’ve worked with. Due to this, I have made intentional efforts to make my work accessible, equitable, and inclusive for students and families of all backgrounds.”

Irma’s tenure as a college advisor overlapped with the Flint water crisis, adding another layer of complexity to her role; however, Irma responded to this crisis with empathy and compassion. Her work was so impressive that she was honored by the national College Advising Corps with the Laura M. & Peter T. Grauer True North Award, beating out 600 other exceptional advisors. Describing Irma’s work, one colleague says, “Irma not only encompasses the traditional characteristics of a dedicated leader, but she does so with an open heart… She inspires others to do the work we should all be doing in this world.”