“Since my life had been transformed by a scholarship, I knew exactly what the impact of that was on a person. And being female, I wanted to assist other women who were perhaps getting into the same kinds of challenges that I was.” 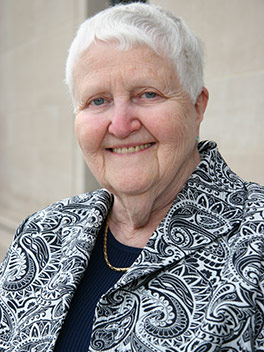 Irma Wyman spoke of her initial contact with CEW as something she had been waiting for. “Where have you been?” she asked, wishing she had had access to a women’s support system in college. Irma had felt the stress of both financial hardship and gender inequity during her years at the U-M College of Engineering as one of seven female students. Her parents had permitted her to continue her schooling in 1945 only after a hefty scholarship offer, the Regents Scholarship, was made. Irma still had to work to pay for books and housing during her five-year program. The lack of equal access to resources and study partners in her male-dominated field indicated to Irma the gender-based ostracism present in higher education.

Irma’s persistence in, as she put it, “living as leanly as I could and working as much as I could, wherever I could” paid off throughout her career. She was appointed Vice President in a Fortune 100 company some 30 years after her graduation, around which time representatives from CEW’s Development Office approached her. Irma was given an invitation to sit on the CEW Advisory Council, at which point she learned of the Center’s mission and some of the challenges it faced.

Irma’s inspiration for becoming a donor had a lot to do with her understanding of struggle and the importance of being given a chance at success. She shared that, “Since my life had been transformed by a scholarship, I knew exactly what the impact of that was on a person. And being female, I wanted to assist other women who were perhaps getting into the same kinds of challenges that I was.” She added that “becoming acquainted with what CEW stood for and was accomplishing made me think that it would do a good job. And the one thing that I really value about the fact that CEW is this seat, this source of my scholarship is that it does the selection of the person, and I think the process is excellent.”

Irma’s support now invests in the education of students in perpetuity. Prior to her death, Irma shared this about the scholars she had already met, “Every one of them has just been outstanding in terms of their need and their ability to use the support. It’s kind of a joy for me to see them go through the academic journey and graduate and get jobs and get married and have children and do exciting things and have problems…it’s life…”