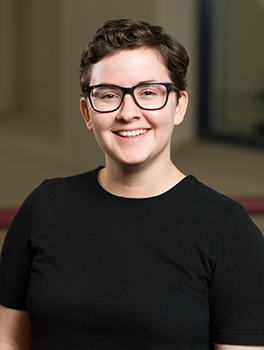 Leanna’s current research is focused on behaviors that she describes as “sexualized aggression,” meaning “behaviors that test, disregard, or manipulate someone’s bodily boundaries,” such as non-consensual touching. In the past, most studies of sexual assault have focused on extreme behaviors, such as rape. However, Leanna argues that “mild” examples of sexualized aggression contribute to the normalization of violence against women. The Riecker Fellowship will help Leanna fund an ongoing longitudinal study that follows U-M undergraduate women. For this study, Leanna surveys and interviews young women about their experiences of sexualized aggression, their attitudes about sex and assault, and their overall mental health. She will use funds from the Riecker Fellowship to compensate participants for taking part in the study.

Leanna hopes that her findings will inform future policies around sexual assault, allowing “researchers, campus advocates, and university leaders to understand how college women negotiate sexualized aggression and identify which contexts place them at heightened risk for such experiences.” After completing her PhD, Leanna plans to pursue a faculty position and looks forward to mentoring undergraduate students who are interested in research.