The Dark Fantastic: Race and the Imagination from Harry Potter to the Hunger Games

“...working toward a fantastic that is restorative, transformative, and emancipatory has the power to remake our world." 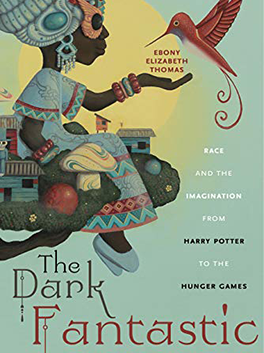 In The Dark Fantastic: Race and the Imagination from Harry Potter to the Hunger Games, Dr. Ebony Elizabeth Thomas invites us to locate—and then reach beyond—the bounds of our collective imagination. While it may be tempting to think of fantasy as a utopian genre in which anything is possible, the truth is that the realities of racial disparity and discrimination in our world, as well as the stories we’ve inherited, play a role in shaping storytellers’ and readers’ or viewers’ imaginations. It is a “massive failure of the collective imagination,” Thomas argues, that has created, and continues to create, fantasy stories in which characters of color are marginalized or subjected to violence.

If “the dark fantastic” is the role that racial difference plays in our imaginations, and consequently our stories, how then do we expand or remake it? Thomas offers a starting point by including counterstories throughout her book, narrating mainstream fantasy stories like The Hunger Games and The Vampire Diaries from her perspective as a reader, viewer, and fandom participant of color and centering the arcs of characters of color. As a result, readers of The Dark Fantastic will almost certainly leave with new and deeper understandings of these popular, often formative fantasy stories and, more importantly, of the contours of their own imaginations. As Thomas puts it, “working toward a fantastic that is restorative, transformative, and emancipatory has the power to remake our world.” The first step is to liberate characters of color in both our texts and our imaginations. Smart, incisive, and engaging for both academic and lay audiences, The Dark Fantastic is essential reading for writers, readers, TV viewers, teachers, librarians, scholars, and anyone who dares to imagine.

The Dark Fantastic: Race and the Imagination from Harry Potter to the Hunger Games came out in May 2019, published by New York University Press. Since then, The Dark Fantastic has been awarded a 2022 Children’s Literature Association Book Award, a 2020 World Fantasy Award, and a 2020 British Fantasy Award. You can find the book at Literati or your local independent bookstore. We hope you will join us in celebrating 2002 CEW+ Scholar Ebony Elizabeth Thomas.